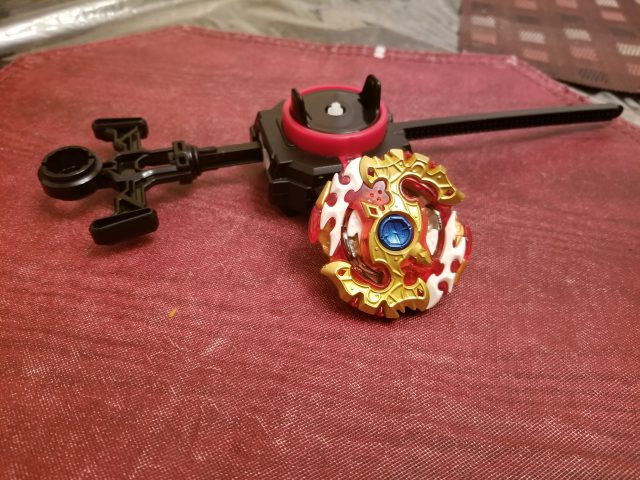 Whether you are familiar with Beyblades or just getting into beyblades, this post is going to open your eyes to some interesting facts about Beyblades including the techniques for launching these toys and upcoming tournaments for kids.

A little bit of Beyblade History

Apart from the fact that the inspiration for these cool spinning tops came from the Beyblade TV series,

This Beigoma toy was known to have been made out of sea shell, filled with sand and sealed with wax. It later evolved and the Beigoma was made with cast metal.

Can you see how the Beigoma look very much like Beyblades? !

It just shows that Beyblades have been around for a very long time. This takes us back to the question below…

Beyblades are not going anywhere…at least not anytime soon. Let me tell you a little story of what I encountered today.

I was at my kids’ school this morning and I saw 2 kids walking into the school.

One was holding the stadium and the other had the Beyblades; with their backpacks right behind them of course! So at that sight, I smiled because it proved how much children love this special toy.

Even at home, my kids still play with their “Beys“, which is the short for Beyblade and they are now asking me to buy more!

A friend and I were talking a few days ago and we got talking about the games and toys my kids like. At the mention of Beyblade toys, she was surprised and asked me this question “are Beyblades still popular?” I’m sure you can only imagine that my answer was a big “Yes”.

Fast forward to today, I wish my friend was there with me this morning to see how cute the kids looked with the Bey and the stadium in their hands.

Now, if you want to confirm that Beyblades still exist, just go online and check Amazon or EBay or even Walmart; they still carry different types of this toy in their stores till date. There are also tons of YouTube videos on Beyblades which just proves that this brand has come to stay!

Toys R Us Tournaments Prove That Beyblades are Here To Stay

To buttress my point about the popularity of Beyblades, some Toys R US stores in Canada organize free annual Beyblade Tournaments for kids. They usually have the tournaments around this time. You can try to do a google search to see what comes up. I took my kids to the tournament that was organized last year and they had so much fun! Freebies such as Sunglasses were given out to those who participated.

Are you familiar with Beyblades?

Now I’m not going to assume that we all know what Beyblades are. You may also need need to know how to launch a Beyblade. Some kids are just getting to that age where they are old enough to play with Beyblades and you may be looking for helpful information about these sophisticated spinning toys.

In order to enjoy this game of Beyblading, you would need a Beyblade – which is the spinning top, remember that you will need the stadium, also known as the Beystadium and the rip cord. Some Beyblades do not come with rip cords though; just like the one I will get into in the next section.

Is my child too young to play with Beyblades?

I’ve heard a few parents talk about this but typically I would say from 6 years is good. My kids started playing with Beyblades at the age of 5 and they started with this Beyblade called – Beyblade Burst Master Kit Playset

also known as Xcalius X1. This type of Beyblade is very easy to use and fast at the same time, keeping the kids entertained! Infact it keeps me entertained as well as I enjoy Beyblading with my kids. It comes with a string launcher that also has a belt clip and it comes with a Beyblade. Yes, you read that correctly, this launcher you see below, comes with a belt clip meaning your cute kid can clip the launcher to their pocket. Sounds cool right? Up until now, my kids still enjoy playing with this Beyblade amongst others that they have. If you have this set, the only item you need is the Beystadium; that is if you don’t have it already.

I still remember when I took this picture of Xcalius X1 some months back.

Now, you can also check out an introduction to Beyblades in one of my previous posts where I talked about what Beyblades really are and how to play with them. You can check it out; because that post combined with this post you are reading right now, will help you understand what Beyblades are about.

Now I am going to get into the techniques for launching Beyblades here.

There are a number of techniques that can be used for launching the tops so as to get victory such as the sharpshooter techniques, shield technique to name a few. Only with practice, the kids can learn these techniques and use them to win their games.

In the sharpshooter technique, the player will launch the top directly at the opponent.

In the shield technique, the tops are launched at a very fast speed by aligning them with the arena wall. This will make the top launch at a high speed. All these features keep the kids engaged and occupied for a long period!

The 4 types of Beyblade tops

There are 4 types of Beyblade tops. I will list each one and describe them down below.

This type of Beyblade wins best against stamina types because they move quickly around the beystadium and are really light so they hit with a lot of power and can normally burst stamina type Beyblades! A good example is Buster Xcalibur.

As their name implies, these Beyblades have long-lasting stamina and they win well against Defense types because they normally out-spin steady defense type beyblades. These type of Bey use their stamina to their advantage so when in battle they tend to last longer than other Beyblade types! An example is Deep Caynox C3 shown below.

Weight: any! it could be light or heavy, but most of the time heavy

Balance types are very, very fascinating because they balance all 3 types and can decide which one they want to use to give themselves an advantage!!! Now here is what’s interesting about this type – in order to win, the Beyblades that fall into this category have a mixture of the characteristics of all the other 3 types discussed above! A combination of Attack, Defense and Stamina is required in this case so as to win. A great example is Legend Spryzen S3 shown below.

Why Kids Should Play with Beyblades.

Most kids won’t mind sitting in front of the screen all day playing games or watching videos. Instead of watching TV shows or YouTube programs for long periods of time, kids are able to develop social skills with peers while Beyblading. Beyblading makes kids interact and share ideas. It keeps them thinking and makes them work out strategies to ensure their Beyblade wins! It improves their motor skills and keeps them off the couch!

Well, it is obvious that Beyblades are not a thing of the past and are still very much present. Check out our complete guide to Beyblading for parents and beginners here. Boys and girls adore them and even adults! The fact that it reduces the time kids spend on screen is a plus!

Now let me put this out there, if you know a cute kid whose birthday will be coming up soon or you simply want to surprise him or her with something cool, I suggest you give them a beyblade! There are different types on Amazon and even in stores like Toys r Us or Walmart. You can also find advanced packs that are for 14 year olds on Amazon.

Are you surprised that Beyblades are still very much around or are you just discovering Beyblades for the first time? Please share your thoughts in the comments. Thank you.

4 thoughts on “Are Beyblades Still Popular?”