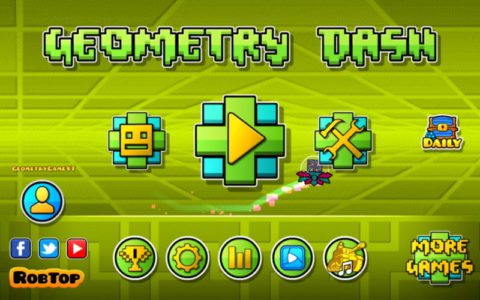 Are you looking for the right game to be playing right now? If so you definitely have come to the right place to find out about what’s hot and trending these days.

Geometry Dash is Now Hotter Than Ever!

Geometry Dash is a video gaming platform developed by Robert Topala a developer based in Sweden. Popularly referred to in the online gaming world as Robtop Games, Geometry Dash is a fast paced game where you have to jump in order to avoid objects you meet along the way.

Geometry dash games are very popular and I have to say they are rocking the charts with these sophisticated games. This game can be very addictive. It came in second place for top paid arcade on play store.

The technique for playing Geometry Dash Levels is straightforward and simple. You simply have to tap to jump, fly and flip your way through obstacles.

The latest is the Sub Zero version but it has less features than the full version. These video games have official main levels and also have over 40 million levels online created by players.

The cool thing about Geometry Dash is that every level has its own unique background music. Secret coins, Level Editor, user – created levels, map packs, three shops and secret vaults are other great features associated with this online video game.

When a player presses anywhere on the touchscreen, you control different game modes. If you hold in a game mode called cube, then you do consecutive jumps. The speed at which the icon is moving can’t be controlled but can only be changed by touching a set of speed changing arrows but in a user created level it can be controlled.

The music playing in the background when the game is being played also makes the experience more fun for players!

There are also different difficulties as well as lengths for levels.

What you really want to achieve in this game is to complete a level by reaching the very end! If a player runs into an obstacle such a player will have to start from the beginning. The longer you stay in level without going back to the beginning, the harder the level gets!

A little after halfway through the level is the hardest part on most levels. If you don’t want to go back to the beginning, then you can use practice mode which saves checkpoints for you along the way! You can play all levels in the game which can be played in no particular order; the only exception is the 3 demon levels in the full version.

In each main level the player can collect 3 secret coins along the way. These coins are scattered in hidden areas or in difficult spots.

Check out our tutorial for Geometry Dash on our channel below:

You can also search for Geometry Dash Steam by simply going to google and typing it on the top bar.

There are 21 official levels in Geometry Dash out of which you the player can play 18 of these levels right from the start. The good thing about every level is that once a level is completed, you get rewarded. There are 3 secret coins in every official level, making it 63 (21 official levels multiplied by 3 = 63) altogether! Cool stuff right?

What are these secret coins used for?

Well, the secret coins help you unlock 3 demon levels: These include:

Levels range from easy to challenging

Some levels are quite easy to beat while some levels can be very challenging, hence the player would have to attempt such levels hundreds or thousands of times to emerge as the winner – but hey that’s where the fun lies! Classification of levels are from Easy to Demon.

Did you know that you can create your own geometry dash level?

Online levels can even be more difficult to beat than official levels. This has been proven times without number by creators of these online levels. Yes! A person who enjoys playing Geometry Dash can create his own online level and have his online friends play the level or levels they have created. This is why this online game is so interesting and fun!

You get to put your own creativity into it by developing your own geometry dash levels within the geometry dash platform! Check out one of our live streams below and see how we take level requests from our subscribers.

Sit back relax and enjoy 🙂 this video below:

This online game is constantly being updated with new versions for fans to look forward to. The latest version right now is 2.11.

Content on the Geometry Dash website is constantly being updated so if you are unsure of the latest version, you can always check back here to see.

When playing, the level of difficulty is represented by the stars as well as the number of stars a player gets when a level is completed. It is important to also point out that you get more stars with official levels than the custom levels.

There is a practice mode that can be used for any level of Geometry Dash; the great thing is that in this mode, there are checkpoints available. This allows the player to restart at certain points instead of going back to the beginning. Green diamond shaped gems are used to represent the checkpoints.

This game also has custom levels apart from the 21 official levels; but the player must have the geometry dash full version in order to have access to the custom levels. Objects that make this game more interesting for players include rings, spikes, blocks, portals and coins.

In order to make sure that a level is possible to beat, it is important for a player to complete their own level with the coins in normal mode.

Verifying a level can be achieved in separate attempts. Here is the catch though – any from of change or changes made to that level will render it unverified. Levels can have music already in the game or you can get custom music from Newgrounds.

Newgrounds – A place on google that helps you to find more music for your level if you don’t like the soundtracks that are already in the game.

Every level created by a user has its own unique ID (identity), the older the level the lower the ID. This means that you don’t have to search for the name of the game. Simply type the ID and start playing right away!

The similarity between levels created by the user and the official level is the fact that they are classed by level of difficulty and this can be decided by the players or Rob Top.

The cool music in the background is a huge bonus for players. Apart from the frustration you may experience at one point or the other while playing which I think is normal when playing any online game, one of the best things about this game is the amazing music. Google “all geometry dash songs” and listen to all the songs, enjoy them all…because I do!

Get Rewarded As You Advance

Players get rewarded while enjoying geometry dash. Players can be rewarded with trails and icons and stars and even on completion of certain official levels.

Geometry dash is a great game! If you are new or if your child is new to this game, let them start with “easy levels”. When they start getting better, especially when they beat stereo madness (the name of the first main official level) or back on track (the second official level), then they can advance to the next levels (polargeist and dry out) referred to as “normal”.

Hard levels such as Base after Base require more skill because they have more memorization and spikes. The game gets more challenging as they advance to higher levels.

Where to Get Geometry Dash

You can search for and get Geometry Dash on mobile on Play Store or App Store and if you want it on your Computer then try downloading an app called steam and searching and downloading it there!

Leave your thoughts below!

8 thoughts on “Geometry Dash Levels – What You Need To Know”